Sitting down with Yorit Kluitman – graphic designer and self-styled cycling fanatic – there’s a number of keywords that keep cropping up during our conversation. Collecting. Organising. Rules. Verbal clues to the visual approach he takes in ordering his world. A world rich in experience with a deep connection to the natural environment that he’s spent 5 years recording for Bicycle Landscape; his beautifully realised book that documents each of the Netherlands’ 388 municipalities. Visually capturing the form and functionality of the Dutch landscape.

Born and raised in Eindhoven, Yorit returned after a spell studying editorial design at the Willem de Kooning Academy in Rotterdam. Appreciating the city’s cycling infrastructure he argues the political agenda for supporting bike friendly projects stems from memories of riding as a child. ‘It’s in their blood and DNA,’ Yorit suggests. ‘So even the politicians share this same understanding and feel the need to prioritise the bicycle as a form of everyday transport. In the sense that we’ve recently had a number of roads closed and replaced by cycle lanes. Super wide and linked to the city’s network of bike paths.’

Since founding his own graphic design studio, Yorit acknowledges that he works more hours now that he’s self-employed. ‘You find yourself doing administration late at night and clients are constantly wanting to contact you about a particular project. Occasionally you get some time between different jobs when you can ride a little more but usually everything’s happening at once.’ 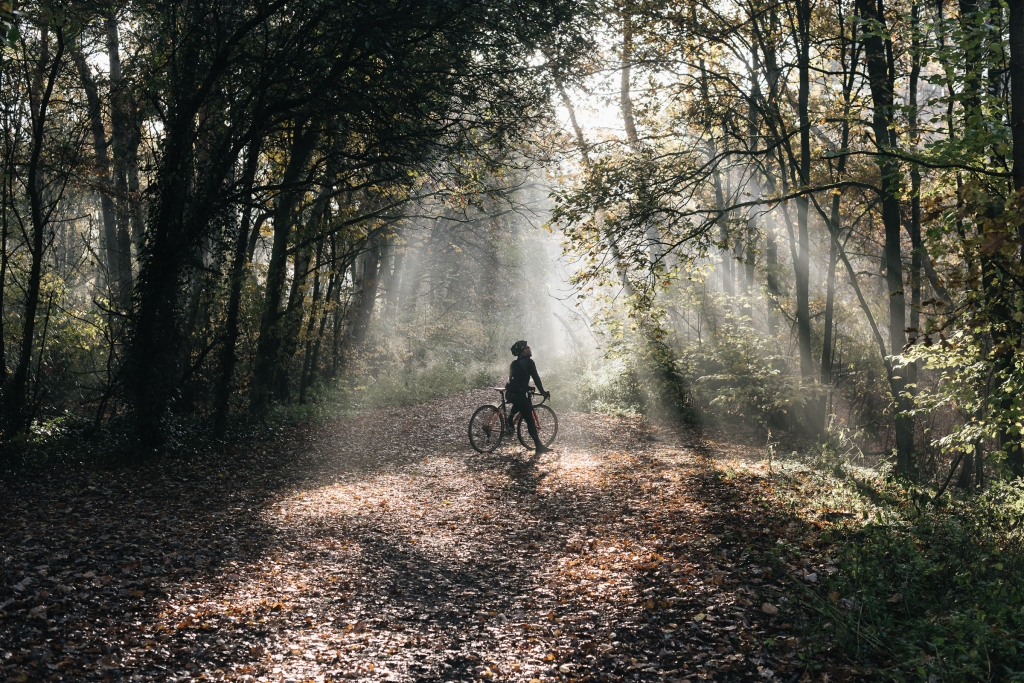 When he does get the time, Yorit tends to head south on quiet rural roads; regularly crossing the border into Belgium where he explains the sandwiches are not only cheaper but also more generous in size. A little further to the north is the Veluwe; his favourite area for riding and the only place in the Netherlands that he considers to have a true sense of wilderness. And it’s this distinction between ‘natural’ nature and evidence of man-made manipulation that brings us to the Bicycle Landscape project.

‘I remember feeling overworked so I decided to start cycling local loops over lunch. Later I bought a race bike and ventured further afield; taking pictures on my iPhone. At the time I was studying in Rotterdam and it just struck me how the landscape in the Netherlands is super graphic. A lot of horizontal lines and organised structure that I began reimagining as postcard views. And from there I drew up a set of rules for the photographs I was collecting. No people or buildings. A spartan image searching for straight paths that relate to the horizon or a vanishing point in the landscape.’

‘A friend of mine,’ Yorit continues, ‘suggested I do all the villages, towns and cities but I looked it up and there’s over 8,500. But I liked the idea so decided to focus on the municipalities as they’re pretty well categorised.’

Reflecting on this 5 year undertaking now that the resultant Bicycle Landscape book has been published – 17,000 km over 153 rides with a final selection of 450 images whittled down from a little over 10,000 – I question whether Yorit views the Dutch landscape through the filter of his graphic design profession? If he considers his interpretation to be exaggerated?

‘There are people and signposts where I ride,’ he reflects with a smile. ‘Noise as I choose to call it. But I leave that all out deliberately. No cars, no people, no buildings. I suppose that’s the way I like my rides. Just me, the bike and my natural surroundings.’

With his home and business based in Eindhoven, his immediate urban environment offers an interesting contrast to the landscapes so meticulously recorded in his book. With a citywide infrastructure dominated by the industrial heritage of his parents’ previous employers – Yorit’s mother working at Philips and his father at DAF – he considers the city in some ways quite ugly but undergoing a gradual reimagining in the shape of the creative and technological sectors utilising the long empty warehouses and production lines. ‘The spaces are now being reworked as studios, offices and apartments,’ he observes, ‘but the skyline is still very Philips.’

Escaping into the surrounding countryside whenever he can, Yorit has a number of bikes with each fulfilling a particular role. ‘I have a St Joris steel bike that was made specifically for the Bicycle Landscape project. Bright orange paint – the Dutch national colour – with a slightly more upright position that cruises well and allows you to look around.’

‘I don’t like ‘noisy’ rides,’ he continues when asked what sort of route he favours. ‘Not in the sense of sound but well planned and fluid in the turns and changes of direction. Almost like a well composed song that starts slowly before building up, a good ride needs to be focused and ordered. I like things to go as planned. Surprises in cycling have a tendency to be dangerous.’

In terms of riding culture, Yorit describes a typical Dutch ride as super social; groups riding routes along coastal roads or through exposed terrain having to work together as there’s always the wind to contend with. ‘There’s a metropolitan lifestyle aspect in cities such as Amsterdam where people tend to follow the latest trends. In the south it’s more a traditional, grassroots interest in cycling. All the towns have their own cycle race in the summer and the terrain is a little more playful with stretches of gravel and forest paths.’

Now that the Bicycle Landscape project is completed, I finish by asking if his relationship with cycling has since changed; prompting Yorit to smile before stating: ‘I ride to enjoy the social aspect. When we come together and head out of the city centre. Enjoying a conversation over a cup of coffee or even a beer. But I’d like to do another cycling project. It’s so much fun riding around with a camera and I still like to categorise. To place things in order.’