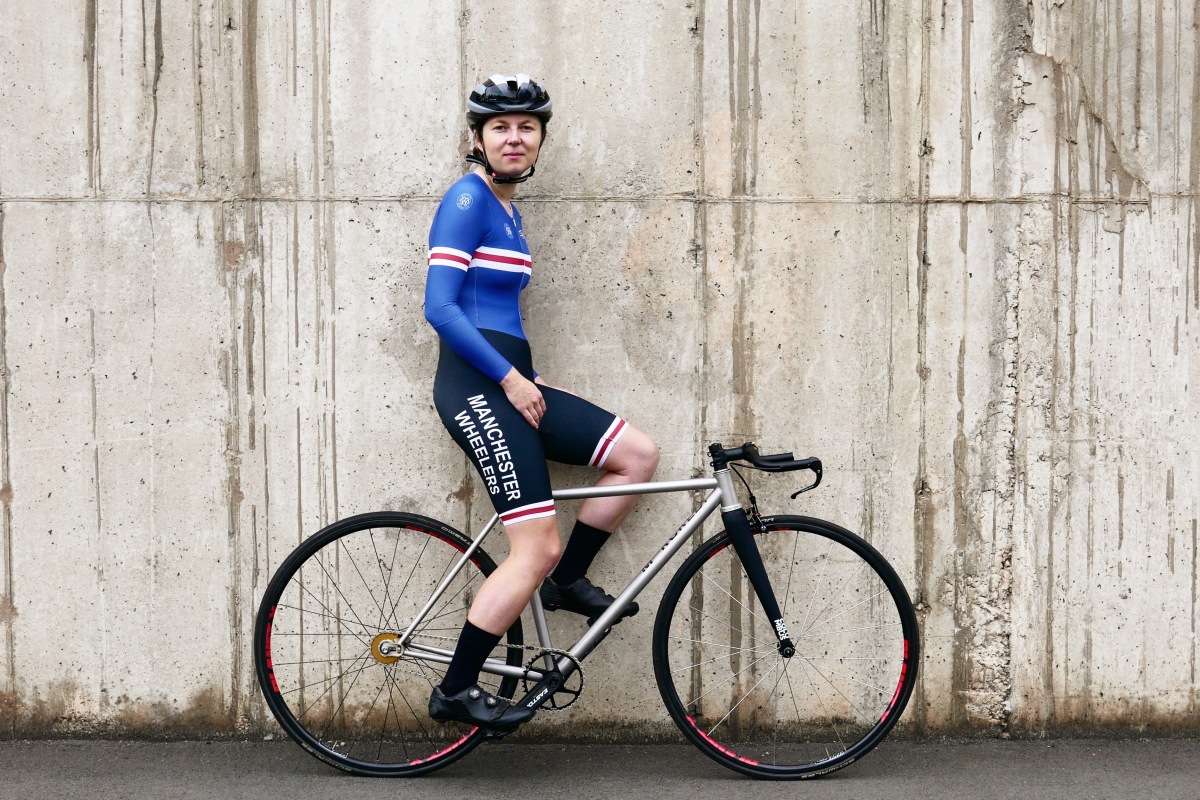 Designer, bassist, magazine lover and bike racer; Holly Carter talks frame building and the art of keeping things simple with reflections from Adeline O’Moreau on what it takes to turn a bike dream into bike reality.

In a way this build started 3 years ago. Every time I entered a hill climb I was taking stuff off my then bike to make it lighter but that got to be a real faff. So I considered getting a carbon frame and building it up to be super light. Fixed gear to save weight and the expense of a full group set and because it just looks so simple.

But I was struggling to find a frame that had the right balance of lightness and strength until a London-based friend mentioned Adeline O’Moreau and her Mercredi bike brand. I got in touch and we met at Euston before going for a coffee and discussing what I was trying to achieve. Classic looks, horizontal top tube; a bike that’s as beautiful to look at as it is to ride.

Working with Holly was really inspiring. Before this project I had little if any knowledge of hill climbing so learning about it in conversation with such a passionate rider was amazing. And then seeing Holly’s reaction when she first rode the bike was priceless. Can you think of a better reason to build a custom bicycle?

Adeline listened carefully to these ideas before taking some time to figure out the geometry and the tube set she’d need. Whether to go with tensioned dropouts, a bridge on the seat stays; all the specifics of what it did and didn’t need. Meanwhile I went for a bike fit with Tony Corke. Replicating a 12% gradient with a view to the bike’s geometry feeling ‘normal’ in those conditions. Optimising its performance for a very defined purpose.

All these measurements and design considerations were distilled down into drawings together with a spreadsheet that we could both access so – as I researched and sourced the parts I needed – they could be added to the build specification. American Classic rear hub, Easton carbon cranks, Planet X ultralight front brake, carbon saddle. Some new parts; others with a little history to them like my stem. Nothing fancy but it’s been up every hill climb I’ve ever entered so it seemed apt to carry it across to my new build.

The fit was pretty special. Tony hacked the jig to put Holly in a simulated hill climbing position although we were really in the basement of a bike shop! The design allows her to use different seat post setbacks and stem lengths / angles to fine tune the bike for ranges of gradients. I used Columbus XCR for the frame and one advantage of using stainless is that the bike can be ridden without the weight penalty of a paint finish. Jack Kingston did a fantastic job of bringing out the Mercredi vibe simply with different levels of polish.

When the frame was finished I went down to London and headed over to the workshop carrying my wheels and a bag of parts so we could assemble the bike together. Adeline had a box ready that I could use to transport the bike back to Manchester but I didn’t want to waste a single second; spinning down to the overground to catch the city service and then smashing it up Swain’s Lane. Not easy in the dark with 40 x 16 gearing but I was just laughing and loving the feel of the bike as it climbed.

The next morning I caught the train back to Manchester; getting off at Adlington before pinning on a number and racing up Brickworks. And what I found interesting considering it was my first time competing fixed on a hill climb was that at no point was I thinking about the bike. Instead of looking down at my gears I simply attacked the course. I stood up, I sat down. Two gears I suppose [smiles].

Having Holly building up the frame in the workshop with me was so special. That sense of energy and excitement as it neared completion. There’s been so many skilled individuals involved in the making of this seemingly simple bicycle and then finally handing it over to Holly knowing it will be raced up the country’s steepest climbs was extremely fulfilling and actually quite emotional.

I like everything in my life to be as straightforward as possible. When I cook it’s one or two pans maximum. And when I design things for the house or the shop*, the simpler the better and it has to work. Otherwise you start covering up any inadequacies and making things more complicated. The whole point of this bike is that it’s just perfect as it is; ‘good vibes only’ as it states on the seat tube. The culmination of a year spent working with someone – someone you really respect – and knowing that you’ve got 5.8kg of the best bike you’ve ever owned.