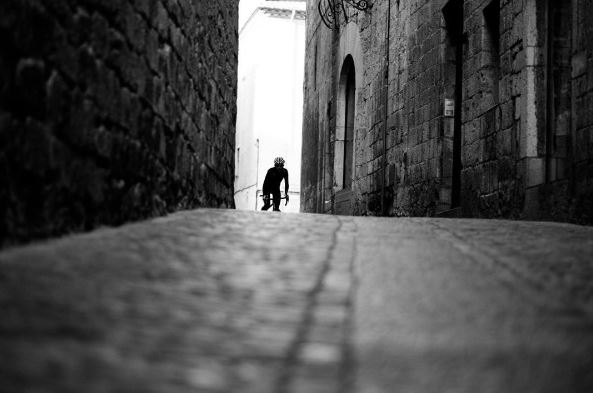 Documentary photographer Ian Walton is the creative talent behind theMUSETTE. Enjoying a low-key lifestyle based to the south of Barcelona, sitting down over coffee in Girona our conversation takes in working for free, the perfect venue for an exhibition and his appetite for adventure.

Are you a cyclist that takes photographs or a photographer that cycles?

I suppose in terms of an income and creating something then I’m a photographer. And I started young when I was 5 taking pictures of my Dad running fell races up in Yorkshire. I was using his Olympus OM10 film camera and making lots and lots of mistakes but the beauty of film is that you can’t delete an image so I kind of learnt what not to do. And I kept on learning at Photography Studies College in Melbourne when I lived down there for a few years. The cycling is a passion which also happens to feature in a lot of my photographs.

On your website you encourage people to get in touch because you’re ‘really nice’. Do they?

Not as much as I’d like, no. But I kind of see that as the ‘internet world’. There doesn’t seem to be the same physical connect between people nowadays. You might get a horrible Twitter post or a comment on your Instagram but there’s a distance. And that’s why I personally try to disconnect as much as I can from the online stuff. Not always easy because it’s such an effective tool for promoting the work we do. But I genuinely mean it when I say it would be nice for people to get in touch so that we could talk over a coffee.

If you could choose any exhibition space for a show of your work?

There’s the Cartier-Bresson Foundation in Paris and, to be shown alongside his work, that would be the dream. Him, Robert Capa, Magnum; they’re the pinnacle for me. They’re what I dream of being because they all told stories and that’s the way I also like to work. Whether that’s a bike race, a product shoot or a wedding; it’s about putting the viewer into that moment. I want you to make an emotional response rather than just simply seeing a still image.

So even though the image is, in a sense, static; the emotional response is not?

It’s very dynamic depending on your personal interpretation. Ideally, I’d like to do an exhibition with no titles. Just pictures on the wall with each person seeing it differently.

Is photography changing as a profession?

In terms of the business side I feel it’s been devalued because too many people are doing it for free. And too many people are expecting it to be done for free. Digital has helped immensely but it also hurts as nine times out of ten people don’t expect to pay you for your time. And I’ve done it; run it through my mind whether a particular job would give me a degree of exposure that would make it worth my while not to charge a fee. But if I did that, the more it hurts the next photographer. And even though everyone’s got a smartphone and a lot of people can take a lot of good photographs, what you get with a professional photographer is consistency. You know they’re going to deliver.

It came from me wanting a name that wasn’t ‘me’. I wanted it to focus on the work. Now it’s got to the stage where people come up to me and say, ‘Are you theMUSETTE?’ And it kind of represents how I place my work. You carry things in a musette and it’s my aim that my work represents more than just an image.

Is it fair to say your work has a certain look?

I feel that, generally, my work is quite thoughtful. And I think that goes back to the emotion of the event. You go to a bike race, for example, and you see the riders for maybe 30 seconds but you see the crowd for 4 hours and that’s what I like to focus on. The race is almost a sideshow to what’s actually happening.

Is the process of capturing an image purely instinctive?

It can depend on the job. At a race I’m always conscious about shooting the crowd first. Then something happens and you just respond. And even though clients provide me with mood boards, for the majority of shoots they just let me get on with it. To do what I do. They’ve seen my work and that’s what they want.

Was there a tipping point when that became the case?

I guess that was around the time I was working with La Fabrica here in Girona. Christian and Amber [Meier] putting faith in me to just shoot. And that’s a relationship that grew through a process of collaboration. I feel that whole period a few years ago…it’s difficult to pinpoint…but it all kind of came together from there.

What do you shoot with?

A Fuji X Series although I still use a Canon 5D when I’m on the back of a motor. This has a zoom lens but, with the Fuji, I have primes [a lens of fixed focal length]. I prefer the quality of a prime and it slows me down which I feel can be a good thing. It might cause me to miss a shot but it’s about me considering what I’m trying to say with each image.

Are post-production editing tools a good thing? Have they changed how photographers work?

There is some work out there that’s been post-produced way beyond my personal taste but, back in the day, you could dodge and burn things out in the darkroom if you were skilled at it. Tools like Photoshop just speed up the process; make it easier.

Personally, it’s been invaluable. I’ve got so much of my work through it. Christian contacted me through Instagram because he liked my work so you could say it’s a shop window. A free shop window. Do you lose some work because people pinch it? Maybe. Do I wish it wasn’t there? Sometimes. But that’s only because I go on it every day, wearing my thumb out.

When, each day, do you first check?

First thing in the morning. When I feel like an addict, I try and make myself wait.

I’m surprised by how much some photographers actually post.

Photographers have a huge amount of content these days. You might think it’s a lot but it’s only a small fraction of their output.

Any idea how photography will develop over the next 10 years? Whether we’ll change how we view and consume it?

I’m a little old-fashioned so perhaps I’m not best placed to comment. If I get published online then that’s great but if it’s in print? I’m buzzing. And that’s nothing against online because you can share content so easily. There’s just something about print; the fact it’s so tactile. And that feeling will never get old.

What bike do you ride?

On a road bike? Yeah. And I’ve got a titanium bike that I first saw hanging on the wall of my girlfriend’s parents’ garage. I kind of had it on an extended loan that proved to be pretty permanent and I converted it into a gravel bike. It’s made out of bits and pieces the way I feel a gravel bike should be. My mate gave me a spare SRAM groupset; another mate an old set of Dura Ace wheels. It’s my ‘Frankenbike’, fits 40mm tyres and is just a blast to ride. I live south of Barcelona so there’s a lot of vineyard roads. It looks like Tuscany and there’s little traffic.

I like the images I shoot that have plenty of space. That allow you to breathe. They also tend to be quite aggressively cropped. You can see something but you don’t always know what’s happening outside the frame. I like a shot that makes you stop and think. I like the viewer to have to work a bit and not for an image to be understood in an instant. Sometimes it’s what’s happening on the edge of the frame that I find particularly interesting.

If you weren’t a photographer?

I wouldn’t be a professional cyclist. It’s too much bloody hard work. So maybe some sort of adventurer. It’s a bit of a cliche but not just travelling. Doing epic shit. Something to push mind and body. Uncharacterised living.

All images with kind permission of Ian Walton