‘We were hosting our first Eat Sleep Cycle trip; in the very early days after we’d just launched. One rider had joined us at late notice so I’d given up my bed and there I was, sharing a slowly deflating blow up mattress with my business partners Lee and Louise – a month after they’d got married – on a kitchen floor next to a fridge that was making this irritating low pitched hum. And I remember that we just looked at each other and smiled.’

Listening to Brian Canty reminisce – a youthful early thirties, he speaks quickly in a soft Irish accent – you soon gain a fascinating insight into the early days of the business he founded with Louise Laker and Lee Comerford in 2016. Fast forward a couple of years and from our mezzanine level vantage point in the stylish setting of the newly launched Eat Sleep Cycle Hub, it’s easily apparent that everyone’s super busy and an indication of the success the brand is enjoying.

What was previously a fashion outlet, this light, airy space fronts onto a tree-lined square adjacent to Girona’s medieval heart; a stone’s throw from the Pont De Pedra Bridge where cyclists meet each morning before heading out into the surrounding countryside. A basement workshop links to the front desk by a set of wooden steps and bike ‘chute’ with the rest of the premises housing a carefully considered retail range together with washing and changing facilities. Everything beautifully finished and a stark contrast to their first premises; a 25m2  space they initially couldn’t afford to heat over winter.

‘Eat Sleep Cycle was started as a blog run by Lee and Louise,’ explains Brian. ‘Like me, they’d been living here in Girona but I didn’t know them. The first time I actually met Lee was at a race in April 2016 without realising that the musings on the blog that I’d been enjoying were his. I’d been running short on water and Lee kindly offered to share a bidon. He still suggests his placing would have been higher if he’d had more water [smiles] but we came away from that race with an instant connection.’

Both Girona-based cycle guides alongside Brian’s work as a journalist and Lee’s in engineering, they soon discovered they shared a similar outlook on life and, perhaps fortuitously, were both looking for a change in career. Two days later following a meeting between the pair and Lee’s fiancee Louise, the initial idea for a bike rental business was mapped out before they immediately went ahead and launched with seven bikes and a fairly basic website.

Still holding down full-time jobs alongside the hours spent staffing their first shop, demand for bike rentals was immediate and by necessity their hire fleet expanded to include the partners’ own bikes. Success that prompted the opening of a new shop in 2017 not far from their first and the addition of 20 Orbea bikes which were subsequently rented out for the whole season.

‘We soon realised during those early days,’ reflects Brian, ‘that there was only so much we could offer with 3 partners and a small fleet of rental bikes. So we decided to make 2018 a big year, took on more staff and began looking for new premises. We had this vision of an Eat Sleep Cycle Hub – a place in the centre of town that would tick all the boxes – and worked really hard over the winter ready for the launch party in February.’

‘I’m not afraid of hard work but I wouldn’t have been able to do this if I didn’t truly love cycling. I went out for a short ride earlier this morning and must have looked at my phone over 15 times. You come into a business like this with loads of energy and ideas but the challenge is to maintain your high standards. To ensure that you surpass whatever riders visiting Girona for the first time have previously experienced elsewhere. And that takes a lot of work and a constant focus on the details. The customer service industry is very labour intensive but if a client has a great experience we know they’ll come back.’ 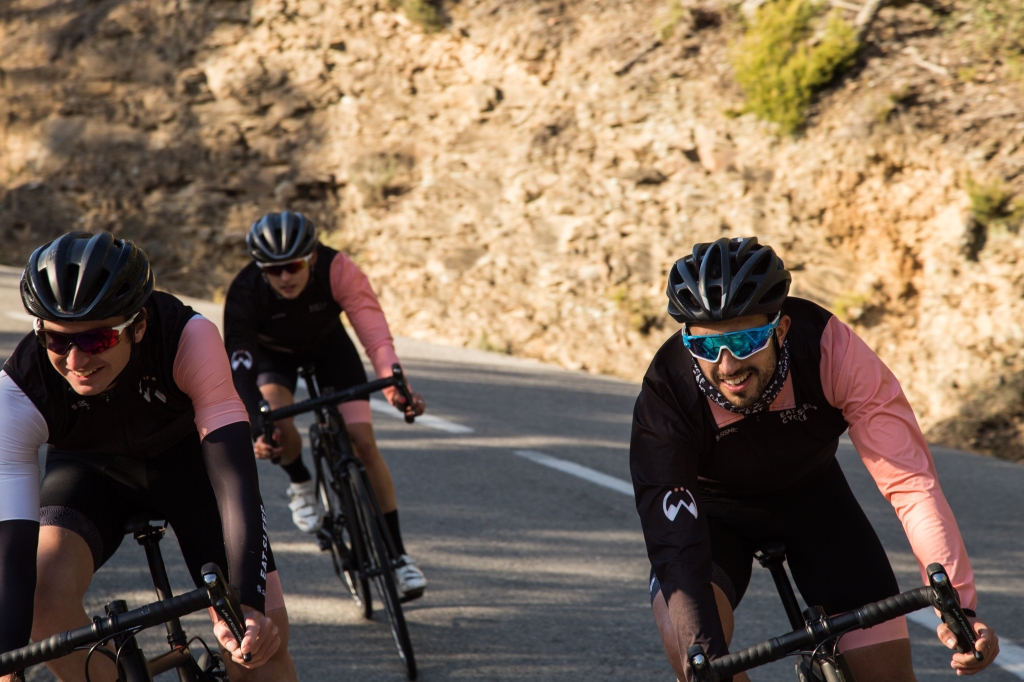 Asked about people’s misconceptions of the life he leads in Girona, a wry grin immediately suggests the reality of running a bike rental and tour business is a matter of juggling a myriad of logistical aspects that his clients, perhaps understandably, never witness.

‘I’m still here when the lights are off and everyone’s gone home. The legal aspects required to keep our 3 vehicles, 8 staff and 80 bikes compliant with the local town hall are enormous. Tax, insurance, accounts. Are those airport transfers paid for? The hotel bookings made? What’s the weather like? And then people ask me why I don’t ride more [smiles].’

‘Delegating,’ Brian continues, ‘is the hardest thing. Giving your trust to someone else. Hard when it’s your own business that you’ve built from the ground up but necessary if you want the brand to grow over time.’

This mention of expansion leads me once again to the new cycling Hub and the added interest of the various product lines that Eat Sleep Cycle are now offering. Together with a recently brokered relationship with Ridley – the bike manufacturer tempering the huge financial investment necessary when purchasing a fleet of 80 bikes with flexible payment terms and a high level of componentry – Brian is excited by future collaborations and points to the rails of displayed products as an indication of the direction they’re taking in terms of merchandising.

‘You weigh up every decision you make as a business but very often it’s simply down to gut feeling. Take our bike supplier Ridley. As a brand they’re rooted in the Belgium heartland and are ridden in the Grand Tours. So, at a very basic level, it just felt right. Likewise MAAP approached us to ask if we could host a launch night and Tactic are a small local brand that can’t do enough for us.  When people want to work with us, we want to work with them.’

With the partners deciding from the outset that word of mouth recommendations would prove a more effective marketing strategy than taking out ads in magazines or newspapers and a goal of becoming one of the biggest bike tour operators in Europe, the stage is set for rolling out more Eat Sleep Cycle Hubs in addition to their Girona base.

‘If we continue growing as we have been doing,’ confirms Brian, ‘I see no reason why this isn’t achievable. For now, though, it’s about nailing Girona and becoming the best rental and tour operator in town. We want to give all our customers the same magical first impressions of riding in this region of Spain that we all experienced.’

‘Girona’s no longer the secret cycling destination known only to the few. There’s a huge market out there for what we offer but the people who’ll be successful will be the ones that love it because it’s not something you can fake. We’ve missed birthdays and weddings; I’m busy day and night. But it still doesn’t feel like work.’