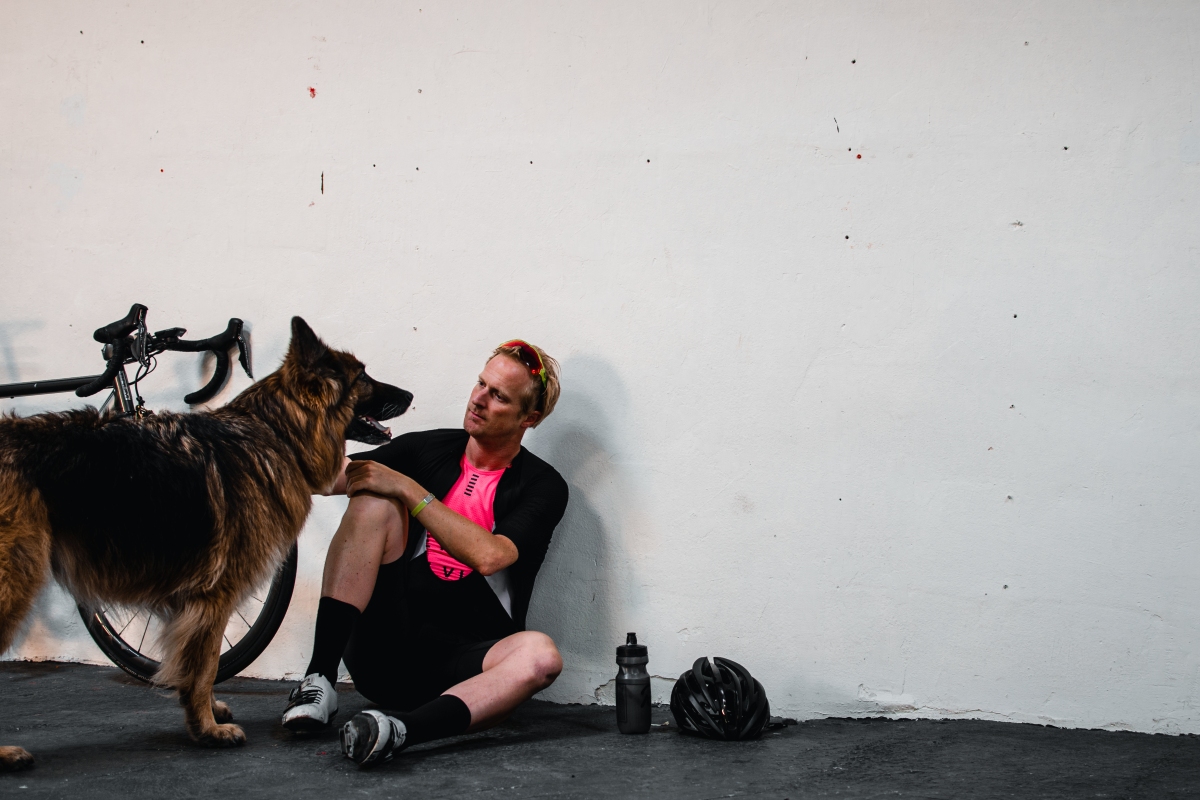 Offering endless possibilities for capturing a moment, it’s perhaps fair to suggest that photography has the potential to tell a story in a single image. But what if this ability to frame and then reflect on the world we inhabit is used as a fulcrum for personal growth; a mechanism for change that involves doing what you like the most in a creative response to earning a living? Questions currently concerning Amsterdam-based Vincent Engel as he seeks to live life with a camera in one hand and the other on his handlebar.

There’s a sense of boundless space that pervades Vincent’s images of his native Holland. In many ways a man-made landscape – architecturally graphic in the angles of the waterways, pathways and pylons – the painterly quality of his work references the rising mist and falling rain; the sun’s shadows and the light off the sea. Subtle layers that draw the eye to the details of the riders framed within.

‘I sometimes get good-natured teasing from my friends when they want to see more close-ups of themselves in my images,’ comments Vincent with a grin. ‘But I find it interesting to see the riders as an aspect of the landscape. To view this relationship in context to where they’ve been riding. To set them against a broad brushstroke of land, water and sky.’ 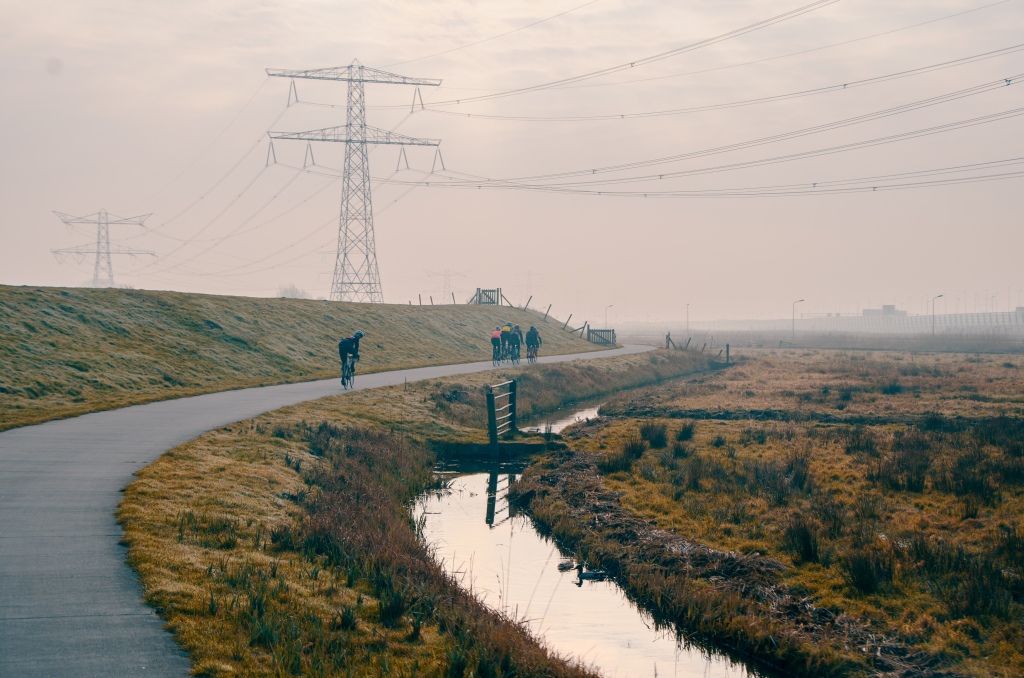 Not that people don’t frequently feature in Vincent’s work; in part due to his involvement with Rapha Amsterdam since returning from a 10 year stint living and working in Saudi Arabia where he founded his design & build company Orange Identity.

‘My interest in photography originates from my background as a designer. I used to do 3D renderings to visualise architectural plans; taking the pictures of the textures I needed – wood, tiles, brickwork – to use in my computer-generated models. So I was pretty obsessed with my surroundings; how light is reflected and patterns are formed.’

‘The change from using the camera purely as a tool to one where I was making an emotional connection to the subject happened in Saudi Arabia. There was only me, my dog and my bike. And if I had some spare time I’d jump in my Jeep and head out into the desert and shoot landscapes. Capturing the solitude of the moment before I gradually began to combine these wide open spaces with a moving object.’ 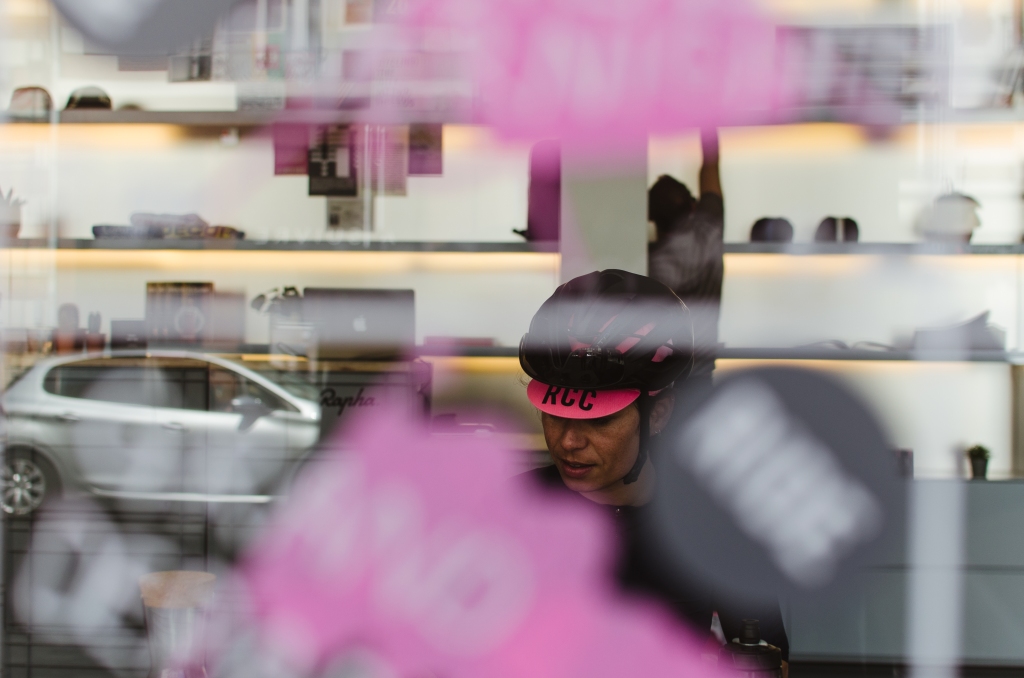 ‘Interestingly I find photographing people far more difficult than those architectural images,’ Vincent explains. ‘My original pictures felt very mathematical but there’s an emotional element to shooting someone riding a bike that I find more challenging. Landscapes in a sense stand still and yesterday, for example, I went for a ride with a couple of friends and I shot over 100 images but they didn’t quite work. I suppose I’m too much of a perfectionist [smiles].’

After selling his company in 2015 and a subsequent return to the Netherlands, Vincent immediately fell into riding with Rapha Amsterdam; feeling such an instant connection with his fellow riders that he describes them in terms akin to a family.

‘For me, it just feels so comfortable. I came to cycling from a racing background but it’s not all about speed and we enjoy our coffee stops. There’s such a variety of routes that we have on offer. Out to the coast, local loops from the city centre or gravel adventures. Riding with a range of people from different backgrounds but there’s still a connection. We do the same rides – we suffer the same – and Rapha makes it possible for this to happen on a number of levels.’ 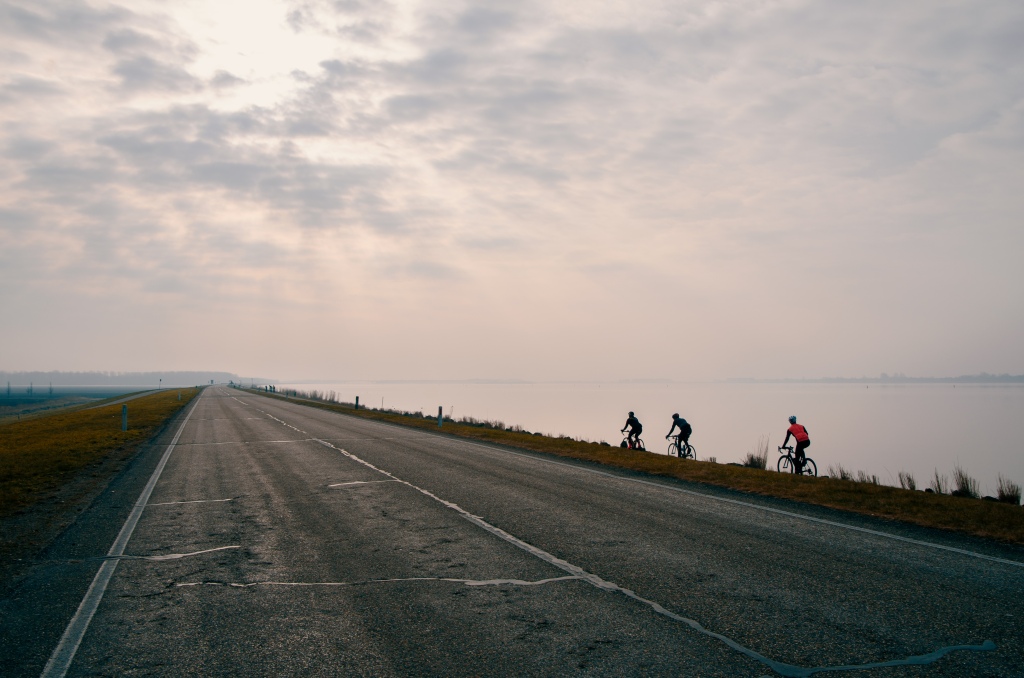 As there’s no escaping the impact of water on the Dutch landscape, Vincent acknowledges that the weather too can bring its own challenges with winters that are cold, wet and windy. Conditions he argues that only make you feel more alive when out riding; to such an extent that he prefers to shoot in the rain rather than bright sunshine.

‘The weather has a significant part to play in the realisation of the images I create and I guess it’s about telling a story by contrasting all these individual elements. Which is why I rarely take a close-up image of someone on their bike because it’s the landscape that informs the narrative as it frames their movement.’

‘In the Netherlands,’ he continues, ‘I’m always looking for strong lines in an image and I thought before travelling out on a recent trip to Switzerland that I would, through necessity, be taking a different approach. But then I began to notice how the mountains overlap and bisect the horizon with strong diagonals in the foreground formed by the roads, trails and even the tracks we made in the snow. So I still had all kinds of lines that draw your attention to the detail in the image [smiles].’ 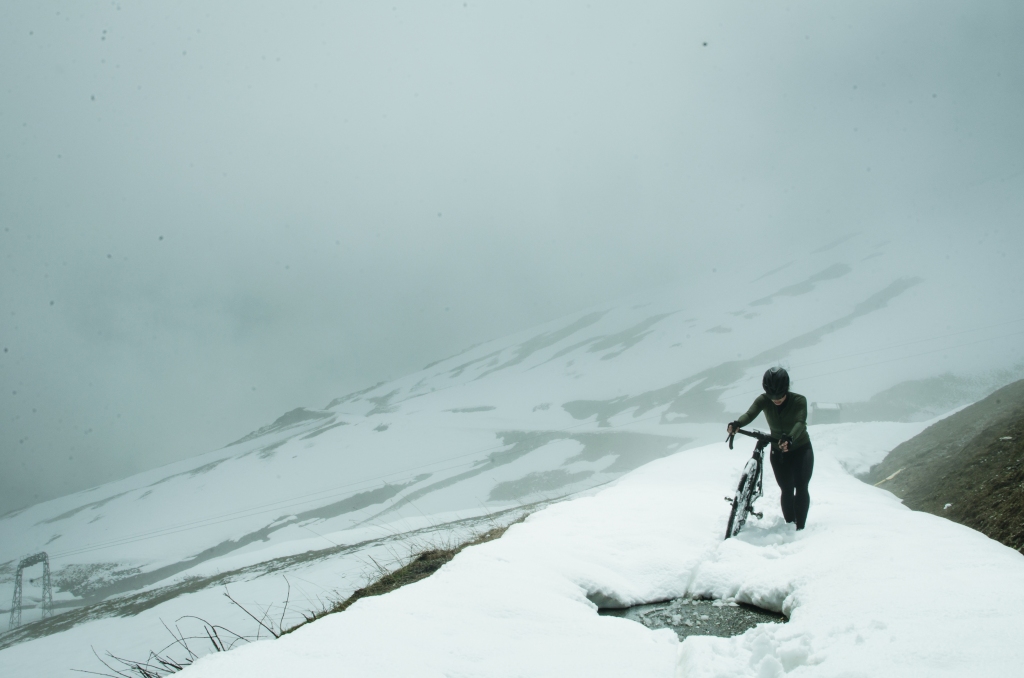 Since returning to his homeland, Vincent now has the time to pursue photography on a more commercial basis and the past 6 months has seen him commissioned by a number of different clients all sharing the same admiration for his photographic style.

‘I’m still learning how to really direct people because I don’t naturally feel happy to be in the spotlight. By me telling someone what to do on a shoot I’m taking myself out of my comfort zone. But I enjoy working to a brief because it implies a certain level of trust from a client and I can take on-board their needs before going out and putting my own interpretation on the content. And I’m just as critical – more so – with my commissioned work as with my own. It’s kind of like my signature on an image so there’s more pressure to deliver. Pressure that I put on myself.’

‘It’s all about a happier life,’ Vincent concludes, ‘and that’s my biggest challenge at the moment. To find something that makes me happy that involves a creative response to cycling. In the past I’ve been fairly financially driven but money isn’t everything. Cycling has always been a constant in my life – since I was very young – so to combine that with photography was an obvious next step. They’re both great passions for me and it feels kind of like an exploration. Finding the new Vincent; making a bigger picture.’

All images with kind permission of Vincent Engel